In this post, let's look at how to poll a system using a Stream.

To make it easier/interesting, I will explain it using a visual approach.

Let's use the following problem statement.

Let's start by visualising what we want to build.

We know that pollFn function will call process function.

Next we want to repeatedly call this function to check for fresh data. 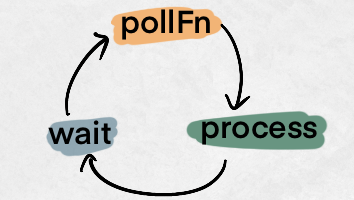 To avoid being rate limited we can query the API every 1 minute.

Now that we have visualised the problem, let's try to implement it. We will first implement it using imperative programming and then using streams, which will be the more functional way of doing it.

The code in continuousPoll is pretty straightforward.

Three lines to poll, process & wait. A fourth to run it in a loop.

It also looks quite similar to the third diagram shown at beginning.

At first glance, it might seem like the imperative version of poll is better, because it consists of four lines of code and code will be familiar to both FP style & imperative style of programmers.

I admit that the FP/Stream version of code will be a bit hard for those who aren't already used to these concepts2.

Before we jump to conclusions, let's try to visualize what the code is doing to see if this might improve our intuition of the code.

We will start with the basic stream pollStream and build upon it by adding each stream function and looking at how it modifies the stream.

Imperative code doesn't give us a straightforward way to extract values out of the infinite loop without relying upon hacks.

Stream makes it easy to extract the result for testing as shown by result function definition.

Hopefully this post gave you an idea on how to turn a polling function into a fs2 stream and how to test a stream.